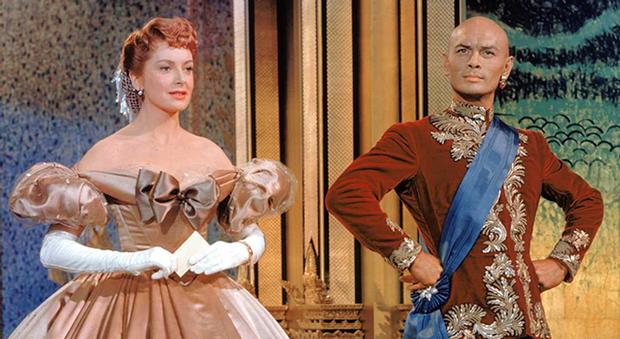 Of the five movies mentioned in Billy Joel’s “We Didn’t Start the Fire” — The Bridge on the River Kwai, Ben-Hur, Psycho and Lawrence of Arabia — The King and I is the only film that does not routinely show up on all-time best lists. Not on the AFI’s Top 100. Not on Filmsite’s Top 300. Not even in the 1001 Movies You Must See Before You Die.

However, when the conversation is narrowed to specific genres, it’s a guaranteed selection, ranking #31 on AFI’s 100 Passions and #11 on AFI’s 25 Greatest Musicals. This is a rather interesting phenomenon if you think about it. Is the film so gimmicky that it nails a target audience but misfires more broadly? Does it only stand out above other ’50s-era musicals? Or has public tolerance of cultural appropriation doomed it despite lavish production values? Whatever the answer, The King and I will always be a cultural touchstone, an important landmark of the romantic musical genre, the parent to a handful of popular new tunes, and a time capsule of the Western World’s sensibility toward the rest of the world.

Based on Margaret Landon’s 1944 novel Anna and the King of Siam, the 1956 film is adapted by future North By Northwest screenwriter Ernest Lehman. It tells the tale of 1860s English school teacher Anna Leonowens (Deborah Kerr), who moves to the kingdom of Siam (present day Thailand) to tutor the 106 children of the arrogant, backward King Mongkut (Yul Brynner). She’s a widow; he’s a stubborn polygamyst, but Anna and the king form an unlikely bond over the course of the film’s two hours, he coming to appreciate her courage, she coming to love his growing sense of compassion.

The film also follows a number of subplots, including a forbidden romance for the young Siamese girl Tuptim (played by future West Side Story Oscar-winner Rita Moreno), but overall the film is true to its title, concerning the two leads and their experiment in culture clash, communication, understanding and personal growth.

The story has been told countless times, the first film coming from 20th Century Fox in Anna and the King of Siam (1946) starring Rex Harrison (My Fair Lady) and Irene Dunne (The Awful Truth). But the success really didn’t pick up until Rodgers and Hammerstein got their hands on it for a 1951 Broadway musical, which ran 1,246 performances and won the Tony for Best Musical.

It was this version that director Walter Lang would translate to the screen for Fox five years later, keeping the show’s choreographer, Jerome Robbins (who would later choreograph West Side Story and Fiddler on the Roof), as well as its costume designer, Irene Sharaff (Guys and Dolls), who would win the Oscar for her rendering of Siamese period wardrobe and Kerr’s collection of massive hoop skirts. Also picking up Oscars were art directors John DeCuir and Lyle R. Wheeler, who created 40 lavish sets of the king’s grandiose palace and the surrounding streets of Bangkok (25 different sets for just one scene). And for spectacle, who can top the symbolic ballet of Uncle Tom’s Cabin near the film’s conclusion?

While the visual spectacle inspired the tagline — “More Than You’ve Ever Seen On The Screen!” — the music was more than you’ve ever heard. Not only do we get an Oscar-winning score by Alfred Newman and Ken Darby, The King and I also boasts a fabulous Rodgers and Hammerstein songbook, featuring such classics as the bubbly “I Whistle a Happy Tune,” the motherly “Getting to Know You” and the show-stopping duet “Shall We Dance?” Ranking #54 on the AFI’s Top 100 Songs, it’s performed on the squeaky clean marble floors of the palace’s grand ballroom, Kerr and Brynner appear double in reflection, their characters dancing out of their former selves in this touching embrace.

Of course, viewers should know that Kerr’s vocals were actually dubbed by studio singer Marnie Nixon, who would dub her again the following year in An Affair to Remember (1957). Whether it’s because of or in spite of the dubbed over singing, the red-headed Kerr became a red-hot star. She launched her career kissing Burt Lancaster on the beaches in From Here to Eternity (1953), but The King and I made her a cultural fixture, replacing original stage star Getrude Lawrence, who died just a year after the Broadway opening. The role earned Kerr her third Oscar nomination, losing to Ingrid Bergman in Anastasia (1956), another Broadway adaptation co-starring Brynner in a similar tale of royalty.

Still, it was Brynner who received most of the buzz for his career role as the King of Siam, the very part that five years earlier had made him Broadway star at the casting suggestion of renowned theater actress Mary Martin. It would be the same role, in just his second film, that won him the Oscar for Best Actor, one of the few actors to ever win a Tony and an Oscar for the same role, the latter upsetting a collection of more established nominees like Laurence Olivier, Kirk Douglas, Rock Hudson and James Dean (posthumously).

The ’50s public clamored over this “exotic” new figure of dark complexion, firm presence, commanding accent and shaved head. That same year he also landed the role of Pharoah in The Ten Commandments (1956), followed by the lead cowboy in The Magnificent Seven (1960). Over time, Brynner’s star faded, as did the admiration of a Russian-American playing Egyptian and Siamese roles, feeding himself an image that wasn’t, inventing stories about his own Asian ancestory, and in time becoming a characature of himself. (A) It’s only fitting, then, that he would cling so close to The King & I, reprising the role in a short-lived TV series and worldwide stage tours late in his career.

A similar argument can be made for the film’s listology struggle in that it’s become a characature of itself, a film that represents all that was good and bad about the ’50s soap musicals, one that stands out as a beacon of its era, but a less-than-perfect work overall. Today, one might point to several instances of the film’s datedness, not necessarily in production quality, but in ideology. Basing its material on a book written in 1944, the film features an old-fashioned worldview of Anglo superiority, functioning on a theme of white man’s burden, in this case a white English teacher going in to “save” the poor Siamese kids and the king from their third-world ignorance. Though such representations may be rooted in the history of English imperialism, the condition of the king and his people is exagerated for narrative drama, and thus appears quite dated in its imperialistic values.

On the flip side, Anna’s character is quite revolutionary, representing the modern idea of women’s liberation, saving the film some face in otherwise blatant charges of global racism. For proof, look no further than the current law of Thailand, where it is illegal to own anything related to the story or the film, the Thai people appalled at the historically inaccurate portrayal of their famous 19th century leader.

But even if the film is dated, it also earns the right to be called definitive. The King and I is simply the best version of the story on film, never usurped by future remakes, including several animated versions, a non-musical adaptation starring Jodie Foster and Chow Yun-Fat (1999), and a 2015 stage musical that won the Tony for Best Broadway Revival. Lang’s version simply has too much pizazz, the undeniable empathy of Kerr, a career turn from Brynner, a breakthrough performance for Moreno, the irreplacable music of Rodgers and Hammerstein, the brilliant set pieces, the straight-from-Broadway costumes and choreography, etcetera, etcetera, etcetera.